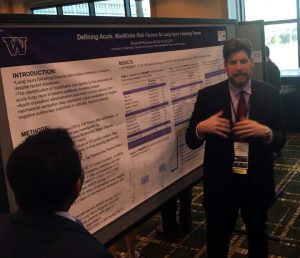 Dr. Bryce Robinson, Associate Medical Director, Critical Care, Associate Professor of Surgery, Division of Trauma, Burn and Critical Care Surgery, at the new member poster session at the Society of University Surgeons (SUS). His poster was a summation of three studies investigating early, modifiable risks factors for the development of lung injury after injury. In significantly injured patients with hemorrhage, early crystalloid exposure (IVFs during hours 0-6) appears to be a modifiable risk factor for the development of hypoxemia and acute respiratory distress syndrome (ARDS). As little as two liters of crystalloid, during that early period, appears to be the difference between those who develop ARDS and those that didn’t. In all of the studies, blood (plasma, platelets and red blood cells), doesn’t not appear to contribute to hypoxemia or ARDS.