The procedure aims to cure aggressive disease with a donor liver. 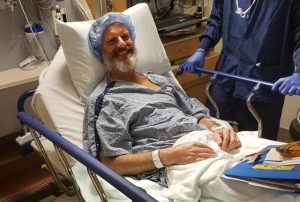 UW Medicine’s transplant team has successfully performed a rare liver transplant to rid a patient of cholangiocarcinoma – cancer of the bile duct. Jere Gianola, 59, of Seattle underwent a five-hour surgery on June 20. A week later, he left UW Medical Center with a donor liver and with no signs of residual cancer.

“I feel fortunate that my path led me to Seattle,” Gianola said just before being discharged. “The level of knowledge and education here is why I ended up with a transplant.”

In the United States, bile duct cancer is diagnosed in about 8,000 people per year, according to the American Cancer Society. Its prognosis is grim: Even with radiation and chemotherapy, median survival is nine to 12 months. 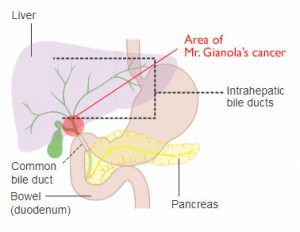 A liver-transplant protocol for cholangiocarcinoma has existed for more than 20 years, but few patients meet the criteria that their cancer must be confined to the bile ducts. For more than 80% of patients who receive the diagnosis, it comes after the cancer has spread to lymph nodes or other structures, research suggests. Dr. Kiran Bambha, a liver-transplant specialist who leads the protocol at UW Medicine, estimated that fewer than 500 such procedures have been performed in the United States.

The protocol involves “meticulous attention to patient care as well as a significant commitment from the patient,” Bambha said, adding that caring for such patients requires expertise in several areas: medical oncology, radiation oncology, transplant surgery, and therapeutic endoscopy.

Gianola was diagnosed in 2000 with primary sclerosing cholangitis (PSC), an incurable disease in which the bile ducts become progressively inflamed and scarred. The ducts are tubes that carry bile, a fluid secreted by the liver that helps the small intestine digest and absorb fats and vitamins.

PSC patients can be asymptomatic for years, until the ducts narrow enough to create a blockage. Such was the case with Gianola. In early 2018, while living in Denver, he started to lose weight rapidly. His bile ducts had become blocked and food was not being digested properly. He underwent a stopgap procedure to manually widen the ducts, and soon after advised his doctors that he planned to resettle in Seattle. 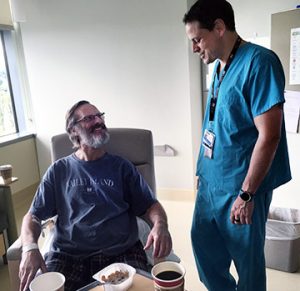 They advised him to continue care with UW Medicine, where he was formally diagnosed with cholangiocarcinoma. This wasn’t a surprise; Gianola was being monitored because PSC is known to heighten risk for the cancer. In fact, he said, the surveillance enabled early detection that probably saved his life.

He was listed for transplant under the protocol – the first such patient at UW Medicine and one of a very few in the Pacific Northwest – and began courses of oral chemotherapy and external-beam radiation. The goal was to try to eradicate the cancer or to keep it from spreading and thereby maintain his transplant eligibility during a potentially years-long wait for a donor liver.

On June 19, after more than a year’s wait, Gianola was advised that he was in backup position for a donor liver. The next day, the offer came through.

Dr. Martin Montenovo, the transplant surgeon, said postoperative pathology tests of Gianola’s original liver showed that the cancer appeared to be gone as a result of the chemo and radiation. “You never know that until you get the liver out,” he said. “Transplant is the ultimate treatment for these patients. I would dare to say that he is cured.”